By Unknown - July 07, 2016
Guest post from a TPB Neighborhood Coordinator

A few years ago, I thought being a part of a Community Supported Agriculture (CSA) program was the best way to source my family's fresh food. It’s a great way to support a local food system: invest in the farm at the start of the growing season and get a weekly share of the crops throughout the harvest. It wasn't until a couple of years later that I joined The Produce Box and realized how much it operated like a CSA, but worked much better for my family.


Wondering how they compare? Check this out:


Cost. While the cost for the whole season is comparable, a CSA requires a hefty payment at the beginning of the season (or several large payments spread out over the season) to help the farmers procure, implement, and maintain everything they need for the year's crops. Paying a small enrollment fee with The Produce Box and then only when you order (every week, every other week - whatever works for you!) for a Box is much more accessible, but still directly supports our farmers and guarantees a customer for their products.

Crops. A typical CSA often consists of one farm, which limits crop diversity. The Produce Box, however, partners with a network of farms, allowing for a greater selection of fruits and veggies throughout the changing seasons. More variety offers more appeal to my family.

With a CSA, you also run the risk of not getting any of a particular crop because of harsh weather or unforeseen event that devastates a small farm. Yes, The Produce Box does occasionally have to substitute an item at the last minute. But the Boxes are still getting satisfyingly filled, thanks to a large network of farms with tasty available standbys.


Getting those veggies home! With a CSA, you pay up front for the growing season and are guaranteed a box every week. If you aren't able to drive out to the farm for weekly pick-up or you’re out of town, you lose out. With The Produce Box, you pay only for the weeks you want to order.


Cutting out the trip to pick up a box is also a big plus: The Produce Box brings it to your door, delivered by awesome moms who will put the Box into your hands or happily transfer everything to a cooler that will keep items fresh until you get home. 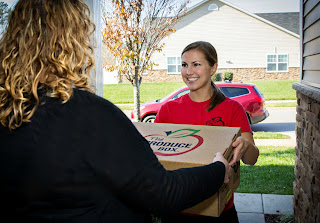 In many ways, The Produce Box feels like a CSA, but it’s easier and more accessible for us, the happy consumer! 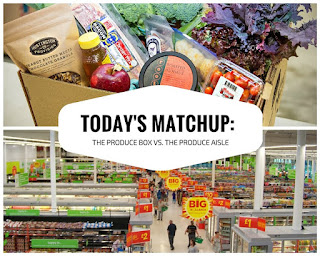